This information is presented to you as a help on your journey as a Music Director. Some music directors who may already have studied this information could also find it useful in sharing with others.

To get started on any musical journey, it helps to have a mnemonic to hold on to. One of the most important is this: "Good Deeds Are Ever Bearing Fruit" (G D A E B F) – that's how to remember the Circle (or cycle) of Fifths.  And it's also a true saying, because indeed, good deeds are ever bearing fruit.

Let's quickly refresh ourselves on what a fifth is. Apologies if we are going over information you already know. A fifth is 5 steps away from the root, so if the root is C, then if you count up the scale of C (which has no sharps or flats, you see the notes C, D, E, F, and G.  That's notes 1-2-3-4-5. Still with us? Outstanding!  Now, consider the C chord. The notes of the chord are C-E-G. We call those notes the root, 3rd and 5th.

Now for the real meat: The Circle of Fifths. 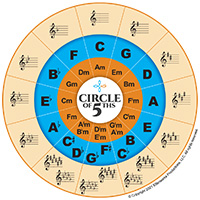 Starting at the top of the circle we find C (which has no sharps and no flats). Moving clockwise, one fifth away from C is G.

We are at the bottom of the circle. An F# is the same note on the piano as a G♭ (flat).  It's the black note in between the white keys which are the F and the G key.  So, here we are at the bottom, here we are at F#.  Big important concept: F# (6 sharps) is the same as G♭ (6 flats). This sounds so weird, but truly they're the same thing, just written differently. It's like that black note between the white keys of F and G. You can write it as F# or as G♭, depending on your point of view.

Since we are on G again, we can start over with that "Good Deeds Are Ever Bearing Fruit" mnemonic. So, G♭ starts the GDAEBF cycle again. This time, you're starting with a boat load of flats and taking away 1 flat each time. That's just another way of looking at adding a sharp, if you think about it.  Anyway, at the very bottom is G♭, then D♭ (5 flats), then A♭ (4 flats), E♭ (3 flats), B♭ (2 flats) and then F (1 flats)...  and you're right back at C again (which as we know has zero flats and zero sharps).

I like to think of the cycle of fifths as a wheel where at the bottom is a flat tire. When you're starting at the very bottom it's the flattest. G♭ with all those flats. As you go up the tire again, it's less and less flat.

Most pop music is really, really easy to follow once you start being able to hear the root chord and the five chord. Lots of songs go from the root (I chord) to the fourth chord (IV chord) and then the fifth (V chord).

I-IV-V is a very common chord progression. It's so common, that the blues you usually hear (12-bar blues because it takes 12 bars (measures) of music to run through the chords) is this.

In "Nashville notation" you just see the lyrics and the chord above written in roman numerals. It's really super-cool because it means you can start in any key, and you'd be able to play the blues with anyone else, just by knowing the chord progression in whatever key you are in.

Once you have the Circle of Fifths firmly in hand, the rest of the music world falls right into place.

Enjoy in good health and great music… and please let us know what else we could add, that could be an online help to you and others like you!

Yours faithfully,
Your friends at NHM Ministrants

Got what it takes to take the Ministrants Oath? Great!

Learn about the Oath